Uranus - Astrology and the Planets in the Zodiac

« Astrology and Planets in the Zodiac

The Planet Uranus - ruling planet of Aquarius, exalted in Scorpio.

Uranus is the personification of The Heavens and the night sky.

The planet Uranus is the 7th in distance from The Sun and takes 84 years to complete an orbit, spending 7 years in each sign of the zodiac. Uranus was discovered in 1781 by Sir William Herschel, following a search lasting many years prompted by the perturbations noted on the other planets by both astrologers and astronomers, although it is just visible to the naked eye under ideal viewing conditions. In astrology, Uranus co-rules the 11th house, and is associated with and governs genius, intelligence, originality, inventions and social interaction. Uranus is said to influence radical ideas including individuality and even revolution. Above all Uranus empowers freedom of choice and freedom of speech. When combined with the effects of other planets Uranus can wreak major changes on the individual and on entire societies. 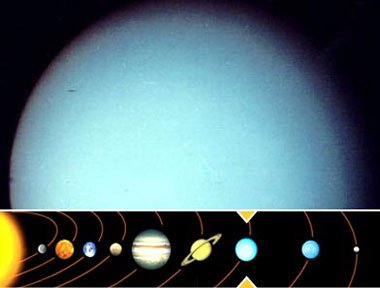 The Planet Uranus in Aries

Those with Uranus in Aries are original and independent. They love a challenge though they often make rash, impulsive decisions. They can also come across as a little harsh and brutal to others, though they don’t mean to be. They welcome change and practically thrive on it. They can also come across as a bit of a know it all, they can be impatient to those they feel are intellectually inferior to themselves, which does not always make them popular. They strive to gain more knowledge and will stop at nothing at achieving their goals and desires. They are sensible when it comes to business and financial matters. They have a strong enthusiasm and high energy in most areas of their life. Sometimes they can be inconsistent and easily become frustrated which can lead to a high temperament.

The Planet Uranus in Taurus

Those with Uranus in Taurus are highly intuitive. They are steady and reliable but also extremely stubborn. Once they make up their mind, there is no going back. They can be jealous and suspicious about other peoples motives. They have a good head for business and are usually financially better off than most. They are very intelligent and imaginative. Headstrong they overcome obstacles in their way without much difficulty. They can also be friendly and easy going but once their back is up they become more stand offish. They do exude a charm that attracts others. They can also be materialistic and are conservative in nature.

The Planet Uranus in Gemini

Those with Uranus in Gemini are versatile and emotional. They have a strong intuition when it comes to other people. They are well liked by others, but can also be a little moody or eccentric which can drive people away. They tend to be analytic when it comes to other people and/or situations. They are intelligent and love to gain as much knowledge as possible but the main problem for them is concentration when it comes to sticking to one task. They despise the routine and dull and and thrive on change on which they easily adapt to. They enjoy the mysterious and unpredictable way of life. They love to communicate with people from all walks of life. They have high imaginations that can shock and surprise others with their ideas. It has been shown that they are responsible for the social changes that have happened in past history.

The Planet Uranus in Cancer

Those with Uranus in Cancer are extremely sensitive and can even have psychic tendencies. They can have unique and original ideas. They are usually involved in political and social events and can be responsible for change in peoples lives. Family is important to them but they can also be quite moody and irritable at times which can drive those close to them away. They can be highly strung and impatient. They can become emotionally insecure but also need to spend time alone at times. They find it hard to commit in relationships and will prefer to run away than face up to problems.

The Planet Uranus in Leo

Those with Uranus in Leo are strongly determined. They are assertive in nature and have strong personalities. They are original thinkers and traditional ways bore them. They can be judgemental and head strong. Their relationships may not last long as they are know to be inconsistent and tend to change their mind easily. They are natural born leaders though can be reckless at times, often rushing from task to task without planning ahead. They are known for their quick temper if things don’t go the way the want. They have the tendency to be arrogant in their manner towards others. They are full of vitality and passionate in what they believe. They are highly spirited. They enjoy being out spoken and welcome being under the spot light. They can sometimes be over dramatic and usually play a prominent role in society thought they are also quieter and warm hearted towards their nearest and dearest.

The Planet Uranus in Virgo

Those with Uranus in Virgo are intuitive and original. They are have a good business sense and are often very successful in their chosen field. They may appear to be quiet and withdrawn to some but they possess a calm, relaxed nature, they usually have good self control and strong will power. They have a deep curiosity for the mysterious and unknown. They are strong, independent and extremely intelligent. They enjoy caring for people who need it. They are interested both in science and in nature and their own strong beliefs in both can sometimes create and inner conflict.

The Planet Uranus in Libra

Those with Uranus in Libra are expressive and intuitive. They have strong imaginations. They strongly believe in justice and will stop at nothing to fight for the rights of someone they feel has been treated unfairly. However in relationships the find it difficult to place all their loyalty on to just one person. They also need to be given their own time and space in which to develop new ideas or they feel smothered. They are ambitious and like to plan ahead. They do possess short tempers but also have the ability to be reasonable towards others. They dislike outside interference. They thrive on being independent. They prefer the unconventional ways to hard cold fast rules. They are tolerant and diplomatic to those that have different ideas to their own.

The Planet Uranus in Scorpio

Those with Uranus in Scorpio have great determination. They do have the knack of overcoming any obstacle that gets in their way. They have forceful personalities and are persistent. They possess a sharp wit and are a stickler for the littlest details in every aspect of their lives. Uranus in Scorpio usually places them in positions of experiencing strong feelings with the greatest intensity which could either be an advantage or disadvantage to them. The have the ability to focus and concentrate until they achieve their goals though their ways could be a little unorthodox. They are extremely creative.  They are not afraid to speak their mind. They can come across as harsh and blunt towards others and have the tendency to be very stubborn. Relationships can go from one extreme to the other as they more often than not blow hot and cold, depending on what mood they are in. They are deep thinkers and like to discover what makes the other person tick, there is not a lot you can keep hidden from them. They can be jealous and possessive but they are also compassionate to their loved ones.

The Planet Uranus in Sagittarius

Those with Uranus in Sagittarius posses strong intuition. They have vivid imaginations. They are spiritual and can also be very religious. They thrive on helping humanity. They love to explore and are often born travellers. They can be eccentric by nature and have their own ideas on what should be law. The love to be as unconventional which can easily shock others. They can be blinkered by not seeing other peoples opinion apart from their own. They crave adventure and love to travel. They thrive on keeping up to date with the new and exciting and will give almost anything a go even at the risk of any danger. They thrive on freedom and are strongly independent. They are generous and warm hearted to those closest to them. They can be high academic achievers though they despise too many rules and regulations. Others are attracted to their optimism and find them interesting conversationalists.

The Planet Uranus in Capricorn

Those with Uranus in Capricorn are ambitious and serious. They have the knack for original business ideas which usually brings them great success. However they do possess a stubborn streak and can be argumentative if others don’t see their point of view. They can be impulsive and restless and have the tendency throw caution to the wind which can sometimes lead to their downfall. They are tolerant of all people from all walks of life. They have the knack of seeing up coming trends and are not afraid of changes. They love a good challenge. They are intellectual and logical thinkers and they have been known to accomplish the greatest ideas to mankind. They are either very conservative or very reactionary. They like to be safe and secure but are not afraid to change just for the sake of tradition.

The Planet Uranus in Aquarius

Those with Uranus in Aquarius are true humanitarians. They are fighters for freedom. They possess great intuitional skills. They will nearly always put other peoples needs before their own, though they need to be more wary of those who try to take advantage of their good nature. They are revolutionary and will fight for equal rights and justice for all. Others find their pleasant and loyal nature very attractive and they are usually the most popular of people. They are very sociable and love to be where the main action is. They can also be a little on the eccentric side. They are extremely inventive and possess the ability to see problems before they even arise. Though sociable, they do prefer to work alone. They are intelligent but can be impersonal and may detach themselves when they wish to be alone. They are radical thinkers and will often work in communities. They become easily frustrated if faced with too rules and regulations.

The Planet Uranus in Pisces

Those with Uranus in Pisces are highly imaginative. They are attracted to anything to do with the occult. They can often appear to be flighty and erratic. They also have a tendency to become pessimistic and even depressed. They have the uncanny knack to sense events that are about to happen. They usually possess great healing skills. They are fascinated with anything mysterious, they have also been know to be responsible for changes in peoples beliefs and religion. They are strong willed and don't find it difficult to give up their own bad habits. They are always eager to help those who are in trouble, often putting other peoples needs before their own. They are very sensitive to the thoughts and actions of other people. Their downfall is they sometimes feel the need to escape reality and can sink into self pity, to stop this they need to focus on positive aspects of their daily lives and their ability to help others.