Jupiter - Astrology and the Planets in the Zodiac

« Astrology and Planets in the Zodiac

Jupiter is the ruling planet of Sagittarius and is exalted in Cancer. It is also rules over Thursday. 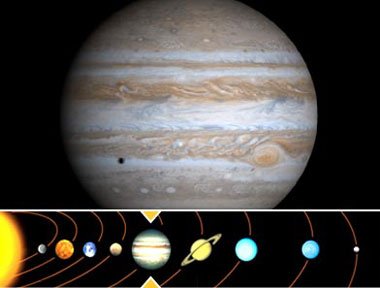 The planet Jupiter in Aries

Those with Jupiter in Aries are impulsive and live for the moment. They are assertive and can be egotistic. They are highly motivated and are experts at arousing enthusiasm from even the most pessimistic of people. They see golden opportunities around every corner. They are doers rather than thinkers and instead of waiting for things to happen will often do it themselves. They have a strong faith in their own personal beliefs so much that they tend to dislike anyone who disagrees with them. However they have a good head for business and are trustworthy and honest. They can be successful if they learn to be more self controlled and less impulsive. They are dynamic and eager learners making them good students and teachers.

The planet Jupiter in Taurus

Those with Jupiter in Taurus are considerate, thoughtful and kind towards others. They show great patience and tolerance. They are very practically minded and usually slow to take risks that may upset their steady and familiar routine. They are family orientated and like to feel secure. They will only usually work hard at something if they know for certain that it will guarantee success in the long run. They usually have a good sense of humour. They love luxury and will seek out the finer things in life. They are very creative and often have a talent in the arts. They dislike pushy overbearing people though they have the tendency to be stubborn themselves.

The planet Jupiter in Gemini

Those with Jupiter in Gemini are sociable and adventurous. They are open minded and have a thirst for knowledge. They have the ability to communicate at most levels. They are good at intermediating between people, always remaining neutral in the face of an argument. They prefer living in the fast lane and thrive on changes. They can become bored easily, often leaving behind many unfinished tasks and business. However they do have a tendency to come up with new and fresh ideas when needed. They are gifted at multi tasking and often take up many hobbies. They love to travel as this gives them the perfect opportunity to experience different cultural tastes. They make good teachers, and publishers.

The planet Jupiter in Cancer

Those with Jupiter in Cancer are compassionate and sympathetic towards others. They are highly intuitive and sensitive to the needs of others. They possess great imaginations and are often creative and artistic. They are also ambitious and excel in careers that consist of caring for others. They place the utmost importance in security and home life, nurturing those closest to them. They have a tendency to become moody and withdrawn and are better in company of others than being alone. They also enjoy socialising whether it's eating out in restaurants or a trip to a theatre or museum.

The planet Jupiter in Leo

Those with Jupiter in Leo are kind hearted and dignified. They are inspirational. They hold strong traditions and beliefs but can also be somewhat opinionated. They can sometimes be a little over sensitive and take criticism very personally. They are highly intellectual and seek out those with similar traits as their own. They work hard and play hard and adore being the centre of attention. They tend to be talented in the arts. They are quite often dramatic. Their enthusiastic and charismatic personality is quite often contagious to others. They make friends very easily and love playing to a crowd of admirers. Social status is important to them. They live for the moment however are also known to make rash judgements.

The planet Jupiter in Virgo

Those with Jupiter in Virgo are practical and conscientious. They are highly disciplined, dislike risks and don't take kindly to those that try and fool them in any way. They will deal with many disagreements and conflict in their life with a graceful and refined manner. They have high standards and expect others to be the same. Others may see them as being cold and aloof at times but they are there for a shoulder to cry on and advice when needed. They are very cautious and a stickler for detail, their perfectionism can also be their downfall. They prefer the simple life and in doing an honest days work. They are good at researching and make good librarians and lecturers.

The planet Jupiter in Libra

Those with Jupiter in Libra are idealistic and diplomatic. They are very open minded and eager to learn new experiences and gain more knowledge. They have a strong sense of justice and truth they have the ability to see both sides of an argument. They are courteous and show consideration towards others. They find it easy to compromise. They are good at solving problems and others will seek them out for advice. They are very creative and can be successful in the arts. They do have a tendency to be condescending towards others if they allow their own ego to get the better of them. They can also become greedy if not careful. However they are usually highly spirited, friendly and love to entertain those around them.

The planet Jupiter in Scorpio

Those with Jupiter in Scorpio are perceptive and intuitive. They have the ability to see certain situations in a different light to what others see. They have a high driving force in whatever they do and have the ability to motivate others in achieving at a higher level. Therefore they make excellent teachers. They are intrigued by the mysterious and can be also very spiritual. They themselves can be very secretive but are also shrewd especially when it comes down to business. They have strong opinions about nearly everything and need to be careful not to impose their own views onto other people. They are determined to succeed in whatever they do in life. They can be emotionally intense as well as cold and aloof. They are intellectually curious and will make good scientists or researchers.

The planet Jupiter in Sagittarius

Those with Jupiter in Sagittarius are adventurous and optimistic. They have a deep yearning to travel and explore, they can become bored and restless very easily if this wish is unfulfilled. They are friendly and out going and get on well with most people. Being brave and full of confidence they have the ability to face most situations head on. They take people at face value, they are tolerant and non-judgemental. They live for the day which can also cause them to be reckless, but if they fail they just brush themselves down and start afresh. They will grasp any opportunity to seek further knowledge and experiences. They love to teach and enjoy inspiring others to learn more about themselves and the world they live in.

The planet Jupiter in Capricorn

Those with Jupiter in Capricorn are practical and disciplined. They are conscientious in most aspects of their life. They believe in hard work and have high standards for themselves as well as for other people. They are patient and understanding of others faults. They strive to be as successful as they can be and can almost become obsessed with the one idea or task therefore they need to be careful not to ignore other needs in their life. They can become quite serious though they do have a dry sense of humour. They have the knack of turning a bad situation into something positive which others find so appealing. They have strong ethics and like to do something that is of great benefit to those around them. They make good architects and are also good working in politics.

The planet Jupiter in Aquarius

Those with Jupiter in Aquarius are born leaders. They are inspirational to others who want to be successful in life. Their optimistic and enthusiastic out look in life is addictive to others. They do not sit around waiting for opportunities to arrive, instead they make their own, never resting until they have found what they are looking for. They are highly opinionated and have strong beliefs and values and woe betide anyone who disagrees with them. They have extreme self confidence and will often take big risks to get ahead. They think big and act big. They are good team leaders and will push others into reaching their full potential. Others may see them as bossy and overbearing but deep down they do have a heart and they mean well.

The planet Jupiter in Pisces

Those with Jupiter in Pisces are humanitarian and charitable. They devote their lives to looking after the less fortunate. They are compassionate and firmly believe that by doing good their own lives will be enriched and full of satisfaction. They see the good rather than the bad in most people, yet their intuitive minds prevents them from being led astray. They are spiritually strong and have the ability to make people feel better about themselves. They succeed in careers which involve looking after people. They also have high imaginations and have interests in the creative arts, music and literature.